AAWA Joins NO on Initiative 976 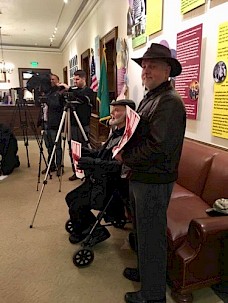 Lloyd Flem and Loren Herrigstad from AAWA protest I-976 and Eyman’s Ironing Board Brigade at the Capitol on January 3rd, 2019.

On January 3rd, representatives of All Aboard Washington stood on the steps of the Washington State Capitol outside the Secretary of State's Office to protest Tim Eyman's latest effort, Initiative 976. I-976 would cap annual vehicle registration fees at $30, roll back vehicle weight fees set by the Legislature and repeal voter-approved car tab taxes to pay for Sound Transit 3, the $34 billion expansion designed to take light rail from Everett to Tacoma, to West Seattle and Ballard, and east to Redmond. Worst of all for us, Amtrak Cascades and freight mobility projects would be gutted. Dozens of cities would lose money for road resurfacing and maintenance.

President Harvey Bowen and I met with WSDOT Rail Division management to learn about the affects of losing funding for the state multimodal account, which would impact Amtrak Cascades. The specifics are not yet available. It is safe to say that the Legislature will not act on this initiative prior to the election in the fall. They have the choice of passing it into law, taking no action and allowing it to move onto the November 2019 ballot, or passing an alternative to go on the ballot with Eyman's measure.

AAWA staff and I will be working closely with the Legislature and other stakeholders who are concerned about the negative fiscal impact if I-976 is passed by the voters in the November 2019 General Election. As the "No On Tim Eyman's I-976" coalition adds more members and undertakes a campaign to alert the public and elected officials AAWA will be asking our members to assist us in direct action to defeat this horrible initiative. Stay tuned for ways to join us on our Facebook page and website.

More information about "NO on Tim Eyman's I-976" can be found here:

The official logo for NO on Tim Eyman’s I-976

At Tukwila station, there are three tracks, two with platforms. While Amtrak has a nominal track for use by passengers, trains are occasionally re-routed to the opposite track at the last minute, and there is only one way for passengers to get to the new platform: by crossing under the tracks at the north end of the station. In a few instances, travelers have missed their trains when they were unable to cross quickly enough. There is no Amtrak staff in Tukwila to provide information to passengers, and the Sound Transit station agents who are sometimes there provide no information regarding Amtrak trains. To deal with this problem, the WSDOT rail office adopted the Public Information Display System (PIDS), a reader board that is intended to display the platform number and status of incoming Amtrak trains. The status changes progressively from ‘On Time’ to ‘Approaching,’ ‘Boarding,’ ‘Last Call,’ and ‘Departed.’

These indications are shown only on the platform which the train is to use. Otherwise, the day, date, and time are displayed. So far, the displays have not functioned properly; in many cases a train is listed as ‘Departed’ even before it has arrived. Other stations have different systems, which are generally performing better. It should also be noted that the Tukwila PIDS shows only Amtrak Cascades trains and provides no information about Sounder trains using the same tracks. A PIDS has also been installed on the platform in Seattle, which also doesn’t work correctly, but it is only visible once the passengers have been allowed to enter the platform; other displays are situated inside the station. 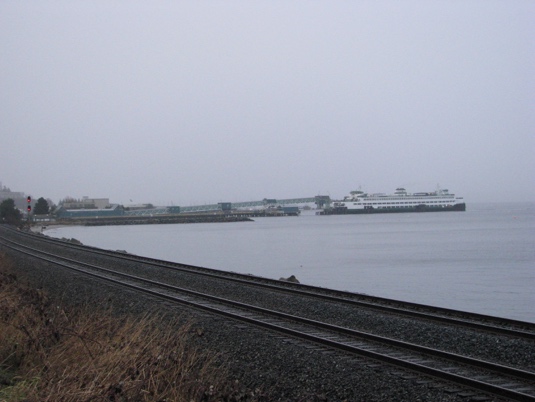 The Intermodal Connectivity Task Force has been researching and documenting how well the various public transportation agencies coordinate their services, particularly with regards to intercity rail service. So far, we have concentrated on sites along the Amtrak Cascades corridor. We’ve been checking on how schedules work, whether information sharing is effective, and the sufficiency of parking facilities. The agencies involved all receive public support from taxpayers. Here are a few noteworthy problems: 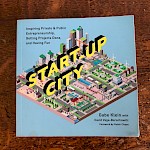 As an avid reader of urbanist books, I am always inspired by the amazing ideas discussed by urban designers and transportation planners. Yet I also find myself frustrated by the stark realities we as advocates face when trying to make things happen. It has become an accepted reality that relatively simple projects are going to be held back by the political process. Nowhere in America is this truer than here in Washington, where our in-depth public input periods lengthen project timelines. We as rail advocates are subject to especially gruesome waits; though Sound Transit 3 promises to extend Sounder to DuPont, we likely won’t see it until 2036, assuming ST3 doesn’t face continued barrages like those led by Tim Eyman. What can we as advocates do about this? What will make people want to listen to us and vote with us? Is it even possible to speed up our progress, or will we always be stuck with delays?

We receive some satisfying answers to these questions from someone with past experience as vice president of Zipcar, director of Washington, D.C. DOT, and transportation commissioner at Chicago DOT. A small- business owner with a strong passion for transportation, Gabe Klein is well-informed in both private and public business operations, especially in the intricacies of organizational culture. In Start-Up City, he tells compelling stories of his attempts to run a food truck business in Washington, D.C., which faced difficulties when it encountered the bureaucratic process and stagnant leaders. Learning from these struggles, Klein goes on to become a DOT changemaker with a fresh approach to running government agencies.

Start-Up City serves as a guidebook for current and future urbanists by presenting some important leadership concepts that are applicable to essentially any field, but certainly have power when dealing with governments. Not only that, it also gives great advice on how to get buy-in from a wide range of stakeholders, allowing you make notable progress while reducing the apprehension of the communities your work impacts. A manual for fast-paced transformation, if you will. And though it’s not a big book, I think it’s a must-read for anyone who wants to better understand the complicated dynamics of public service and advocacy. Consider adding this little book to your list of titles to buy for the new year!

Coming Soon: A New Look for All Aboard Washington

If you’ve gone online recently to become an AAWA member or renew your membership, you’ve probably had a sneak peek at the new website that we’re developing. It’s still under construction, but we’re working to make it simpler, easier to use, and friendlier on the eyes for phones and tablets. You will soon see a design that’s meant to reflect our vision for a 21st century passenger rail future.

Please visit https://www.aawa.us/ and let us know what you think. 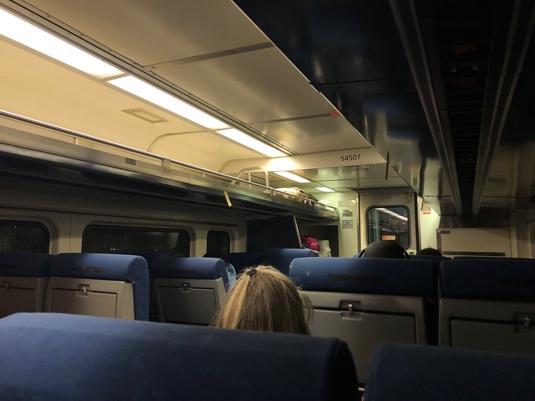 Though they’re certainly not as fancy as Talgos, it was fun riding Horizons for the first time

2019 On the Horizon: Ringing in the New Year on Amtrak Cascades

What better way to celebrate the start of 2019 than with a train ride to Canada? Not only was I able to enjoy the trip with our friend Charlie Hamilton, but we were able to experience it with unique equipment: Amtrak’s old Horizon cars. Here are some highlights. 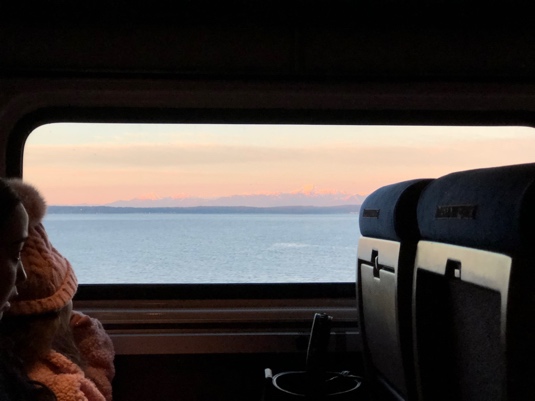 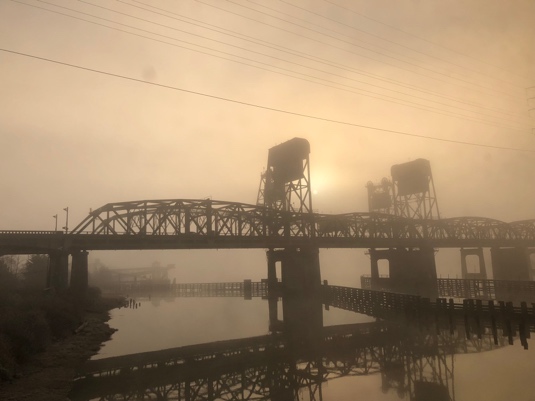 Foggy, cold weather slows us down as we cross the Snohomish River near Marysville 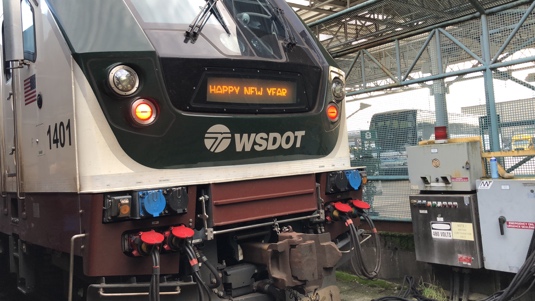 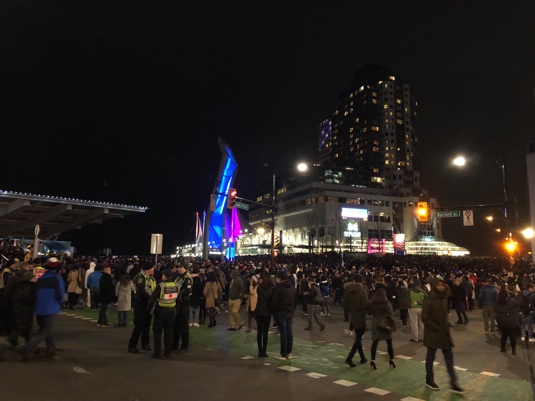 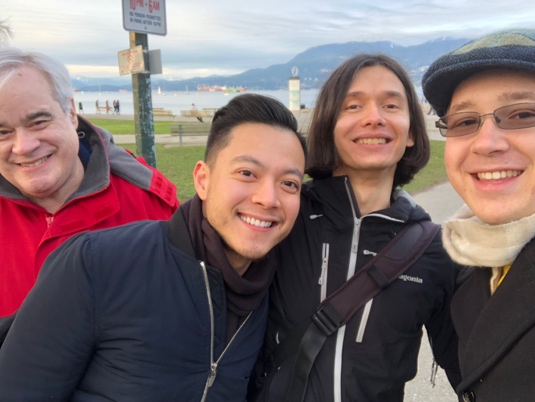 You never know who you might run into at Kitsilano Beach, perhaps even some old friends

All Aboard Washington members contributing to this newsletter include Charlie Hamilton, John Neller, and Luis Moscoso.