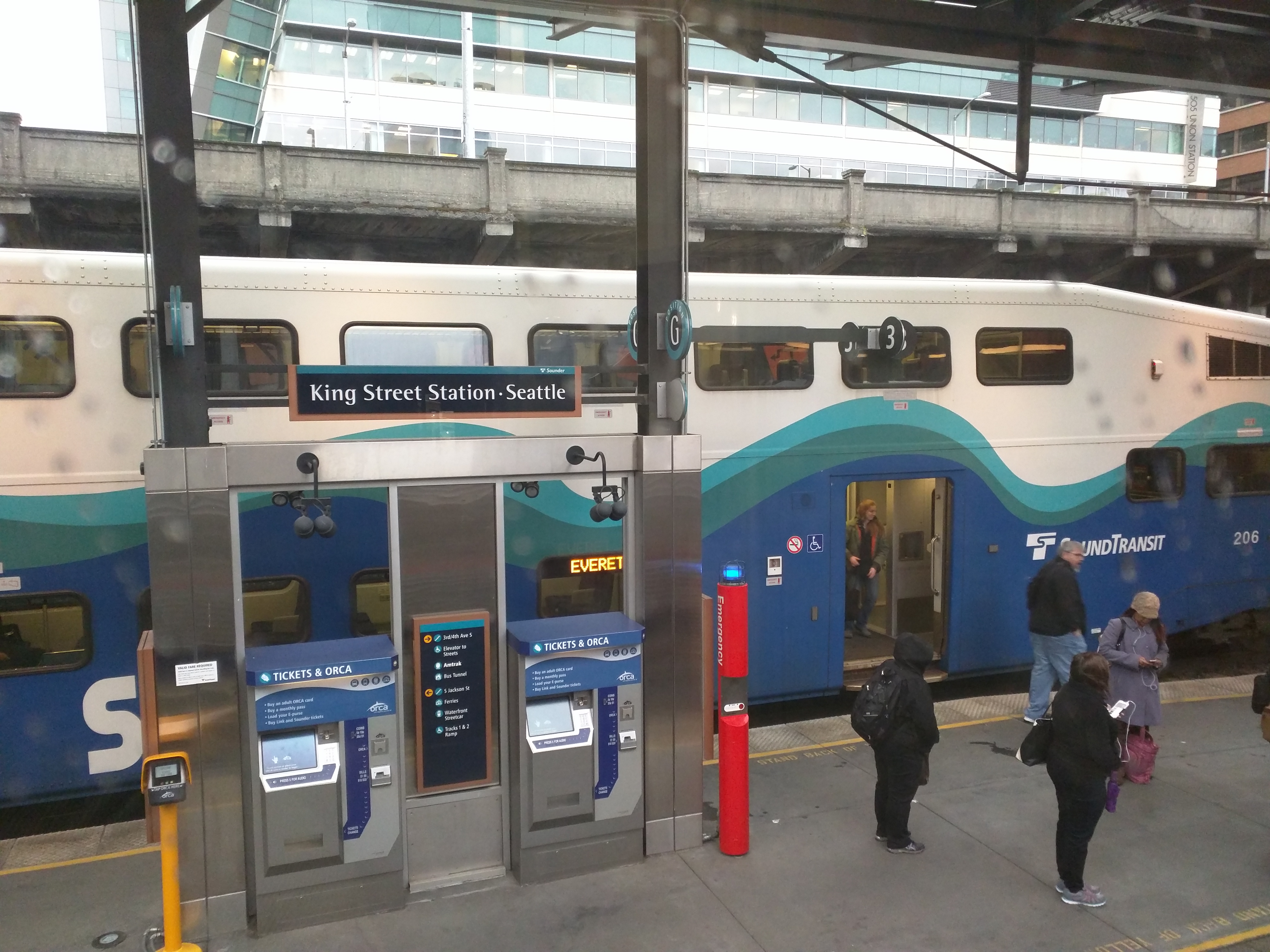 Boston-Chicago, July 23-24 Since I was going to be in a Viewliner sleeping car from Boston to Chicago and was unsure about the time I might have in Chicago to repack, before leaving my niece’s, I crammed everything I would need for four nights into my overnight bag. I checked my suitcase all the way to Seattle from Boston.

There is no diner on the Boston section of the Lake Shore Limited but sleeping car passengers get a coupon for a sandwich and a drink in the coffee shop car for lunch. I don't think the train exceeded 50 MPH anytime between Boston and Port Road Crossing, about 13 miles from Albany-Rensselaer, and there were several delays following or meeting CSX freights. Port Road Crossing is the junction with the CSX line to Selkirk Yard. When Conrail was set up, it said it didn't need the line into Albany, so Amtrak bought it. From Port Road Crossing for the 13 miles into Albany the train speeded up to about 70 MPH.

There was additional delay at Albany-Rensselaer because the eastbound Lake Shore was late and still being switched. We were about two hours late leaving Albany which meant it was about 9:00 PM before I was able to get into the diner. The crew seemed overwhelmed, but eventually I got a decent dinner.

I also got a decent Amtrak breakfast in the diner going into Chicago. I was back in my roomette, listening on my scanner, when I heard that someone had fallen in the diner and they couldn't get her up. There was discussion about where the Emergency Medical Service might meet the train and a spot near the Amtrak shop going into Chicago was agreed upon. After we stopped there, the sleeping car attendant came to tell me the EMS had arrived and I mentioned that I had heard about the problem on my scanner. She said, “I should have come to you to find out what was going on.” We eventually got into Chicago Union Station about three hours late, but in plenty of time for me to connect to the California Zephyr.

Chicago-Sacramento, July 24-26 Leaving Chicago on the California Zephyr I was glad to be in a comfortable superliner roomette. We were advised that the train would make all scheduled stops except Omaha. Passengers for Omaha would be bussed from Lincoln, Nebraska. I was glad to hear this because it meant that we would be going through the famous Rocky Mountain scenery that I had missed on previous trips when we detoured through Wyoming.

The first major delay was the crew change point at Ottumwa, Iowa. The eastbound train had evidently been quite late so one of the returning crew members would not be off his required rest break until 7:30 PM. Shortly after that time we left Ottumwa about 45 minutes late.

Approaching Denver, I did not wake up in time to check our timing at Ft Morgan, Colorado. I guessed we were about two hours late.

However, we were delayed in the outskirts of Denver meeting three eastbound freight trains. At the first siding we held the main while two freights slowly looped through the siding. We then moved on to the next siding where we held the main while another freight slowly looped through the siding. To me, this is an example of poor dispatching. If it was absolutely necessary for the freights to be dispatched before we arrived in Denver, we should have been put in the siding to allow the freights to pass at track speed and thus allowing us to be on our way sooner.

Denver Union Station is being renovated as an intermodal terminal. In the meantime, the temporary “Amshack” station is behind Coors Field and is no longer within walking distance of the Oxford Hotel and downtown Denver restaurants.

The stub siding into which the train backed, was long enough for the train but the platform was not. It was necessary to stop to unload any passengers detraining from the last sleeping car before backing the rest of the way into the siding. The waiting room and ticket office are across an active street, which passengers must cross by using a crosswalk protected by traffic lights.

Leaving Denver, I enjoyed the scenery going through the Rockies, not around them. At Glenwood Springs I saw one hotel van still meeting the train. Service in the diner was good throughout the trip from Chicago to Sacramento, with the standard Amtrak meal choices.

There were no further major delays and we arrived in Sacramento at 4:30 PM, about 2:15 late, but in time for connecting passengers to catch the 4:55 PM train down the San Joaquin Valley to Bakersfield with a bus connection to Los Angeles. Announcements were made on the PA approaching Sacramento that the train would be held for our arrival if there were any further delays.

Sacramento-Seattle, July 26-27 After storing my overnight bag on arrival (for a fee) in the baggage room, I made the short walk to Old Town Sacramento for a drink and dinner on the Delta King, now serving as a hotel on the waterfront. Prior to WWII, it provided overnight service between San Francisco and Sacramento with the Delta Queen, which later was moved to the Mississippi River system. I traveled from Memphis to New Orleans on the Delta Queen some years ago. It’s now tied up in Chattanooga as a hotel but there are reports it might be returned to active operation.

Leaving Sacramento, the Coast Starlight departed about 1:30 late (1:30 AM). However. it made up time along the way, leaving Portland on time and arriving in Seattle about 45 minutes early. My suitcase was there waiting for me, having come from Chicago on the Empire Builder.

In my Superliner roomette I was provided with a “Welcome Aboard” brochure including, among other things, the menus for each day in the Pacific Parlour Car as well as in the diner. Having had three days of standard Amtrak dining car meals, I opted for the Pacific Parlour Car. On the Coast Starlight reservations are taken for lunch as well as dinner. Reservations in the parlour car are limited. Each reservation is for a table. Travelling alone, I had a table to myself. Families or couples each had tables to themselves. Menu choices are also limited, but different from those in the diner. There was only one server in the parlour car but I was pleased with the service and meals. Of course there was also the complimentary wine and cheese tasting in the Parlour Car in the afternoon.

Support All Aboard Washington