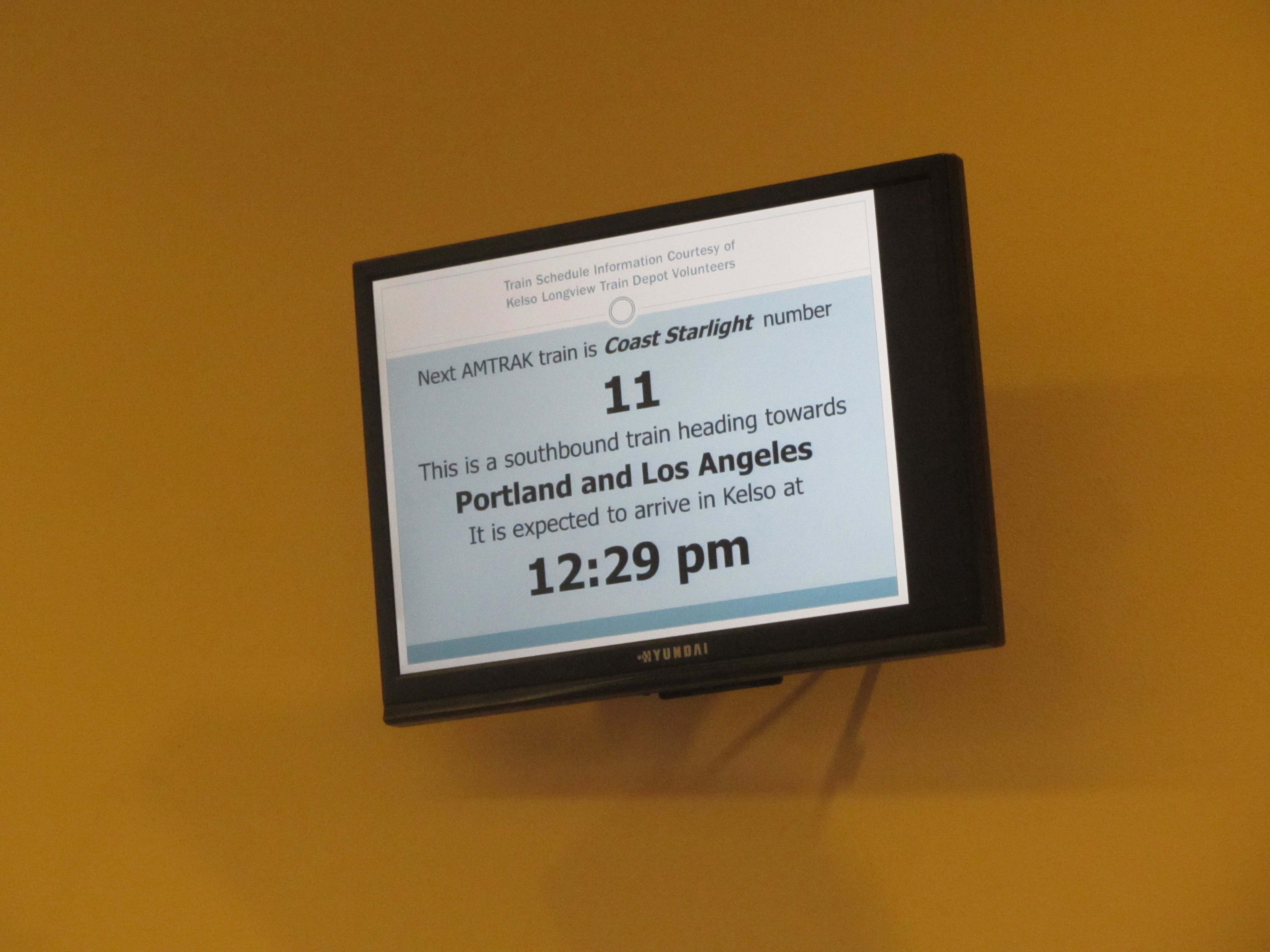 The excuse for my trip (after flying to Cincinnati and renting a car to drive to my college fraternity convention in Columbus, Ohio; then to Kingston, Tennessee to visit my brother and his wife; and Asheville, North Carolina to visit my nephew and his family) was to return by train with stopovers in Wilmington, Delaware to visit an old colleague and in Rhode Island to visit my niece and her family.

Charlotte, July 20 The closest Amtrak station to my nephew's home is Greenville, South Carolina, where the northbound Crescent is due at 10:58 PM. Since my nephew and his wife had to go to work and their daughter to day camp, rather than hang around their house by myself all day, I left after breakfast on a detour via Charlotte, North Carolina to check out the new light rail line there. Since the station in Greenville only opens about an hour before train time, I first went to the Charlotte Amtrak station to pick up my tickets for reservations previously made and to check my suitcase to Wilmington, Delaware. The Charlotte station is relatively busy. In addition to the Crescent passing through in each direction, the Carolinian and two Piedmont trains terminate there.

The Charlotte light rail terminates in downtown but everything in the vicinity was paid parking, so I followed it on parallel streets to the outer end at the beltway where there is a multistory free parking garage. I bought a day pass ticket and rode back into town. After a good lunch in a restaurant a half block from one of the downtown stations, I resumed my ride, taking a few pictures, and returned to the parking garage.

The Charlotte light rail follows the right-of-way of an old Southern Railway branch that ran through the downtown. The outer portion of the corridor is still used by Norfolk Southern for freight on separate tracks. The light rail has no street running and has several high elevated structures over railroads and major highways. Through downtown it is on an elevated structure with pedestrian walkways on each side.

Greenville, July 20 From Charlotte, I drove to the Greenville/Spartanburg Airport to turn in my car. There I got a limousine (there being no other pubic transportation) to the Greenville Amtrak station.

Hindsight being better than foresight. I should have just gone to downtown Greenville where I could have had dinner and hung out in a bar until time to go to the Amtrak station. It’s at the Norfolk Southern yard office and crew change point. There are no food or drink establishments within walking distance.

While waiting at the Amtrak station I watched several Norfolk Southern trains change crews. In a big change from “Jim Crow” days, it seemed to me that the majority of the Norfolk Southern operating crews in that area are black.

Greenville-Wilmington, July 20-21 The Amtrak office at Greenville opened on time at 9:30 PM and a reasonable number of passengers appeared before train 20 arrived about 45 minutes late. Several sleeping car passengers boarded in addition to me. Ahead of me going up the vestibule stairs was a man slightly younger than me and his wife. As he boosted a large suitcase up the stairs, he seemed about to fall backward onto the platform as the sleeping car attendant stood and watched. I said, “Shouldn't you be helping him up with his baggage?” She replied, “Don't tell me how to do my job, I don't tell you how to do yours.” She also added, “I tried to help him, but he pushed my hand away.”

The design of the Viewliner sleeping cars, in my opinion, leaves a great deal to be desired. I hope there are some improvements in the new cars Amtrak is ordering. There is no space in the roomettes for anything more than a small, overnight bag and there is no rack elsewhere in the car for larger baggage. Each roomette has its own toilet, but in a very cramped space, and there is no larger facility down the aisle for pubic use. Also, you must be on good terms with any traveling companion if one uses the toilet while the other either sits (daytime) or lays in bed (nighttime) watching.

Before arriving in DC, I had time for breakfast in the diner with the standard Amtrak choices (eggs scrambled only, not to-order as on the Empire Builder). No problems with the service.

After on-time arrival in DC, I was able to get onto the platform and watch the change of the diesels for an electric to continue our journey. Why it takes such a number of people to do this I do not understand. After the various hoses and cables between the diesels and the train were disconnected, an Amtrak road engine, acting as a switcher, coupled onto the diesels, and pulled them away. An electric, under its own power, then backed onto the train and the cables and hoses were connected.

Wilmington, July 21 After on time arrival at noon, I was met by Ralph Hairsine, the only person still living of the people I worked with there on the Pennsylvania Railroad in 1962-63. We went to lunch in a restaurant in the area, which was industrial when I worked there, but is now an up-scale condominium, office and restaurant area. There are even water taxis on the river. The Wilmington station has been rehabilitated extensively and is now the Joseph R. Biden, Jr. Railroad Station. The tracks are on the top level of the station; ticket office and vendors on the level below, which is a level above the street. The building across the way which housed the PRR division offices, including mine, and was mostly vacant in 1962-63, is now an ING building. The pedestrian bridge which connected it to the station has been removed but the brick work that covered the opening is evident.

Mention has been made in the magazines of the “Ladies Waiting Room” which was renovated in the process of the station rehabilitation. We went to it up the grand staircase (Ralph said he used to slide down the brass banister) from the ticket office level. It is equipped with old-time benches and chandeliers, but is locked and serves no useful purpose. It is on track level adjacent to a low level platform. All trains, except possibly some commuter trains use the tracks with the high level platforms. Anyone using this waiting room would have to go down to the ticket office level (where there are some seats to wait) and back up to the high level platforms to board a train.

Wilmington-Kingston, Rhode Island, July 21 After retrieving my suitcase, I took a Northeast Corridor Regional train from Wilmington to Kingston, the station for my niece's town of Wakefield. I had checked my suitcase to Wilmington because Kingston does not handle checked baggage. The only train handling checked baggage on the corridor north of New York City is overnight regional train 66. Boarding from a high level platform at Wilmington presented no problem with my suitcase and there was a rack at the end of the Amfleet car for larger items.

Across the aisle from me was a young women with a baby and more baggage than the official Amtrak limit who had a ticket to New Haven. She needed to get from there to Waterbury, Connecticut. I heard a trainman advising her to get off at New York and take Metro North. She also had several other women passengers advising her. I spoke up to tell them that Metro North operates out of Grand Central rather than Penn Station so it was agreed she should continue to New Haven. Something was worked out, but I don't know what. She had a cell phone and perhaps arranged for someone to meet her at New Haven. Checking my maps after getting home, I learned that the Waterbury line is not electrified, so there is probably a diesel shuttle service from Stratford, Connecticut, where Amtrak does not stop.

Kingston-Boston, July 23 After my visit, my niece got up early on Saturday to drive me to Kingston to catch the 6:17 AM train 66, the overnight regional from Newport News to Boston. Fortunately, she went into the station with me where the agent told us 66 was canceled due to a truck hitting a catenary pole in the vicinity of New Haven, but there was an 8:35 commuter train out of Providence that would get me to Boston in time for my connection to Chicago. On weekdays, MBTA operates from the Providence Airport station to Boston, which would have been a little closer, but not on Saturdays. My niece graciously drove me to downtown Providence, where I was able to get the MBTA to Boston.

The Amtrak ticket office in Providence does not sell MBTA tickets. You get them at the coffee counter; cash, no credit cards. The MBTA service between Providence and Boston is diesel powered even though it operates on the Northeast Corridor. Some of the commuter stations appear to be on non-electrified sidings.

Continues Next week as I go to Chicago than down to Sacramento and home to Seattle.