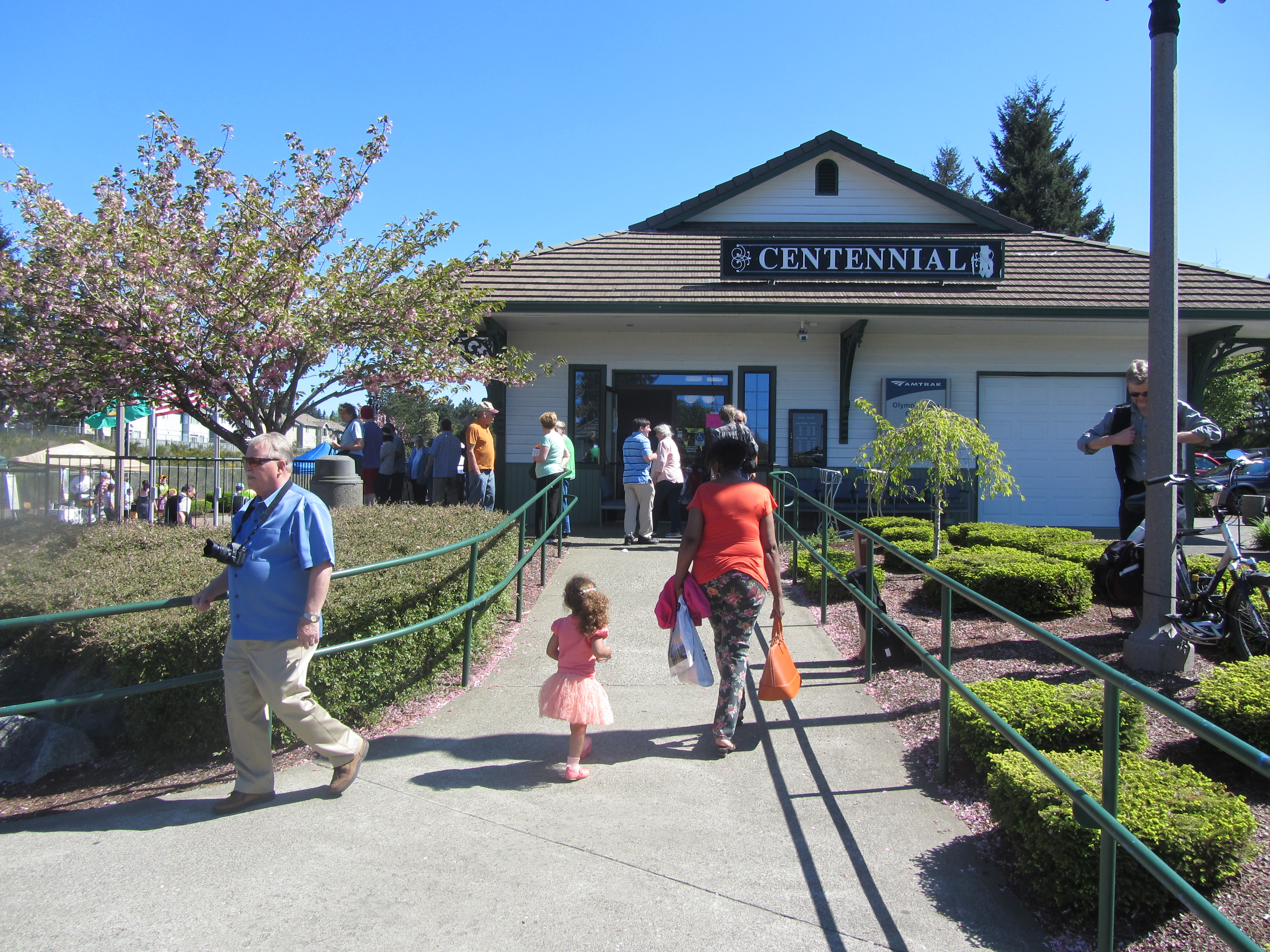 Jim Fredrickson, a career telegrapher, dispatcher and transportation assistant for Northern Pacific and Burlington Northern Railroads; a friend to many; and a long time All Aboard Washington member passed away April 15, 2016 at 89. Among his many passions were Northwest railroad history and photography. Here is Carl Fowler’s moving tribute to Jim:

The wonderful railroad photographer, dispatcher, trainmaster, historian and writer Jim Fredrickson passed on to an eternal ride on the NORTH COAST LIMITED late last week. He was 89. I knew Jim not only as a railroader, but also as a tour director and friend. Throughout the 1990s and into the first decade of the new century, Jim honored me by escorting rail tours all over the United States and Canada for my tour company, Rail Travel Center and much more by his friendship and boundless kindness. I treasure his inscription in my copy of his 2000 book Railroad Shutterbug, “To Carl and Dixie (my wife) with thanks for keeping me on the rails”.

Jim possessed a deep passion for trains, of course, but also for American history, beautiful scenery and for never forgetting a friend or colleague. His vast photography archive (over 11,000 images are cataloged by the NP Railway Historical Society), will serve as his most lasting monument. Jim had a poet's eye not only for trains, but for the place of the railroad in nature and for eloquently memorializing the people who worked on the trains and the passengers who rode them.

In a Jim Fredrickson photo when a train appears it is always in the context of the great landscapes of the northwest, or, more intimately, in the world of his working railroader friends. Jim memorialized the grandeur of mighty articulated steam Yellowstones storming Evaro Hill, and also the workaday world of telegraphers, ticket agents, roundhouse workers and of course the passengers who enjoyed the very well-run trains of the Northern Pacific. His photography stands with the equally remarkable work of his friends Warren McGee and Ron Nixon as a lasting tribute to the world of railroaders a record of the transition from steam to diesel, of the last decades of the NP and of the coming of the merged giants of the 21st century.

The basement of his home in Tacoma contained an astonishing record of the late 20th century in the Pacific Northwest. Never forgetting his college training at the University of Washington, Jim meticulously catalogued his vast collection not only of timetables, company documents, photography and such treasures as the original plans for Tacoma Union Station, but also recollections of FDR's secret trips in WWII to the northwest and of the evolution of the region. This remarkable treasure has happily been preserved in the Pacific Northwest Railroad Archives. He never forgot the women of the NP either.

A superb writer, he contributed a column regularly to the newsletter of the BNSF Credit Union in Washington State that told real human stories of the trials, foibles and triumphs of his friends on the NP and on the competitive Great Northern and Milwaukee Road. These columns provided the framework for Jim’s three wonderful photo books, published by the Washington State University Press, Railroad Shutterbug, Steam to Diesel and Railscenes. Perhaps because they were produced by a non-railfan publisher this books are not as well-known as they should be, but if you do not own them I encourage acquiring copies. In the very best sense they are a great read.

I met Jim through his efforts at historic preservation. My company sponsored a ride on the last train from Tacoma’s elegant Union Station the day it closed in 1984 (south on the Amtrak MOUNT RAINIER, returning on the now lost PIONEER). Jim had been the driving force in the “SOS” Save Our Station campaign. By then Amtrak was barely using the building. The rotunda and the main waiting areas were boarded up, with Amtrak’s facilities in a tiny room off the south end of the Concourse. But Jim arranged a brief entry into the closed precincts. We saw the soaring ceiling, the decayed, but still magnificent grandeur of this 1911 Reed and Stem masterpiece (the same architects who did most of the design of Grand Central Terminal in New York). All the proceeds from the last trip were donated to the SOS campaign and happily the building was saved. Today it is again a gateway to the great northwest, serving as the entry to a new Federal Courthouse, the Washington State Historical Museum and the “Bridge of Glass”, which spans the freeway that (sadly) occupies where the platforms once were and the surviving BNSF mainline.

But I remember Jim the most for his wonderful work as a tour escort. Here he got to share his passions with nice folks from all over the world, to relive the days of railway organized group travel to the national parks and to show new friends his deep love for history, the rail industry and his country. Jim always carried a loose-leaf notebook, carefully organized with details to share for each day of the trips he led. He brought along appropriate examples of his superb photography, copies of NP (and other railway) timetables, route guides and shared these notes in cogent, well delivered talks and more importantly in person to person chats with each member of his tour groups. If there was a problem (a late train, a hotel with slow bag handling), Jim simply quietly handled it. He was the best, always and above all else he honored me by being a friend. I will miss him every time I see or ride a train, every time I visit a national park and most of all when I view his wonderful legacy of photographs and revisit his lovely books of recollections of a life with the rails.

A giant has passed and we are all diminished when such a wonderful person leaves us, but Jim Fredrickson will live on in the books he wrote, the photos he took that so exquisitely encapsulated his life and most of all in the memory of his co-workers, colleagues and his vast legion of friends.