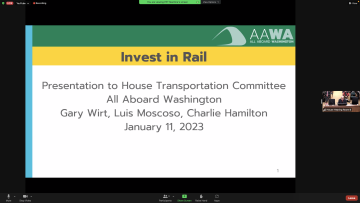 It’s Time to Invest in Trains

Everyone is now asking how passenger trains can be part of our multimodal transportation system. FINALLY! Thirty years ago, the Legislature committed to building a statewide intercity passenger rail network in RCW 47.79. But Initiative 695, which gutted state funding sources, and the Great Recession of 2007, made it even harder for WSDOT to follow through on our original 1992 goals. Rail Plans continued to be written, hoping for the day when state and federal funding could really get things going.

Now is that time. You will hear testimony today about how that can be accomplished. The same Federal funding the state is now requesting for UHSR – the Bipartisan Infrastructure Law – is also available for conventional intercity and interstate passenger rail expansion. The Legislature can now breathe life into State Rail Plans that would see intercity passenger rail resumed over Stampede Pass to eastern Washington, thereby connecting large cities and rural communities that were cut off when Amtrak service ended there in 1981.. This service is crucial to alleviating highway congestion and decreasing fatalities, as well as providing transportation to Washingtonians who are not able to drive. This would also go a long way toward replacing short distance aviation flights with passenger rail like what we see happening in Europe.

It’s time to Invest In Rail and complete our multimodal rail system by linking the Link Light Rail, Sounder, and the Amtrak Cascades on the west side to much-needed service east of the mountains. Research shows that all of this can be done soon, and will be necessary to support UHSR when it is completed in the future.

Thank you Mr. Chair for this opportunity to speak.

My name is Gary Wirt. I live in Yakima and am Vice President of All Aboard Washington (AAWA). I became interested in the work of AAWA in 2019 when I found that the legislature had approved a proviso for the Joint Transportation Committee (JTC) to study the feasibility of establishing passenger rail service between Seattle and Spokane over existing Burlington Northern Santa Fe tracks via Stampede Pass. I have ridden Amtrak’s North Coast Hiawatha between Yakima and Seattle numerous times with my wife and two sons. Of course, that was prior to 1981 when the service was discontinued. Today, my best alternative is to drive I-90 to Seattle or Spokane, which is not a pleasant experience, particularly during the winter months. I would describe I-90 as being increasingly dangerous as congestion increases.

Passenger rail service from Seattle to Spokane via Stampede Pass would improve public safety by reducing highway deaths, injuries, and property damage along I-90 as well as reducing highway congestion and maintenance costs while providing environmental benefits.

Our state supported Amtrak Cascades service is an essential service for folks living up and down the I-5 corridor. Our Washington State sponsored ferry service is essential to those living in the San Juans & Puget Sound area. We provide these essential services because they serve a public need. There is a similar need for passenger rail service to serve the 1,000,000 Washingtonians that reside along the Stampede Pass corridor in Yakima, Benton, Franklin, and Spokane counties. The 2020 JTC feasibility study states that the route is technically feasible with ridership estimated to be above or comparable to some other Amtrak state supported services.

Let’s take advantage of the funding opportunities for rail that are provided by the Bipartisan Infrastructure Law by applying to the Federal Railroad Administration (FRA) for inclusion of the Stampede Pass route in the Corridor Identification and Development Program before the FRA deadline of March 20, 2023 and, let’s conduct a benefit-cost analysis and economic analysis of the route as suggested by the JTC study so that decision-makers have the data necessary to determine whether this service is worthy of long-term investment.

Thank you again for this opportunity.

It’s time to Invest In Rail and complete our multimodal rail system by linking the Link Light Rail, Sounder, and the Amtrak Cascades on the west side to much-needed service east of the mountains. Research shows that all of this can be done soon, and will be necessary to support UHSR when it is completed in the future....

All Aboard Washington and AORTA met in Centralia. We had some sound and internet connection issues, but the conversation was excellent. Thanks to everyone who participated....

Reminder: All Aboard Washington-AORTA Annual Meeting Next Saturday

You are invited to attend the joint annual meeting of All Aboard Washington and The Association of Oregon Rail and Transit Advocates next Saturday, December 17, from 1-3 pm....