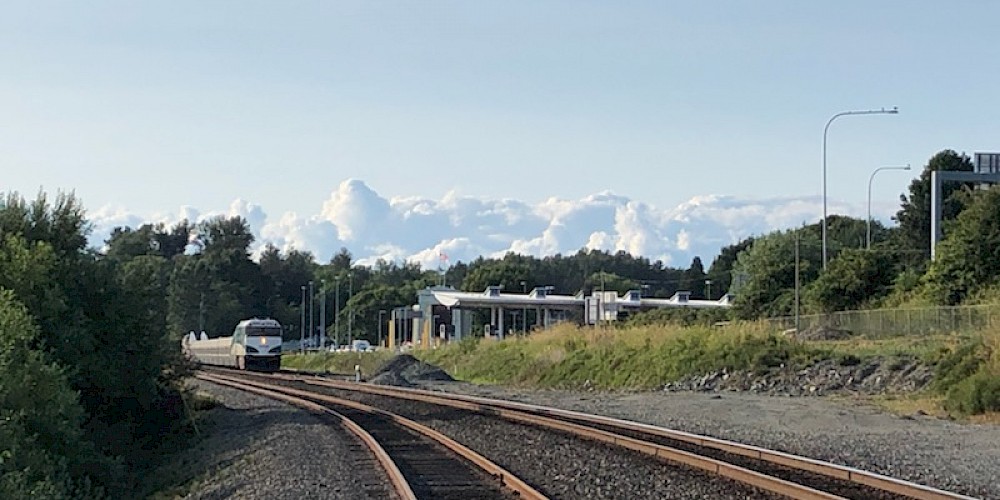 Amtrak Cascades trains pass right through the heart of Blaine, Washington, a picturesque town along the US-Canada border. Despite its popularity among visitors, Blaine is difficult to reach without a car. With existing tracks and an old station building beside their historic downtown, Blaine’s residents and businesses could benefit hugely from having a Cascades train station. All Aboard Washington (AAWA) held a meeting at Semiahmoo Resort on July 13th to discuss the idea of opening a station in Blaine.

Even before the meeting’s scheduled commencement, Luis Moscoso, Lloyd Flem, and other AAWA members were greeted by a room full of area residents eagerly waiting to hear about the opportunities and challenges of this undertaking. Nearly 50 people from both sides of the border partook in lively discussion of reopening a train stop in Blaine, which was last used by Amtrak’s Pacific International before 1981. This wasn’t just an enthusiast gathering; in attendance were local officials including:

Numerous eye-opening presentations fed participants’ curiosity. Bruce Agnew, director of Cascadia Center and ACES Northwest Network, presented with AAWA member Loren Herrigstad about the idea of “Gateway Semiahmoo.” With growing South-of-Fraser communities like Surrey powering BC’s Lower Mainland economy, Agnew pointed out that transportation is an ever-present issue in local planning efforts, and that Cascades trains could do a much better job serving the region. He then turned to Blaine’s existing train depot as a catalyst not only for receiving state-sponsored Main Street revitalization program funds and jumpstarting the proposed Blaine Boardwalk, but also as a way to better connect the region and provide better exposure to the rich cultural heritage of the Semiahmoo People. Agnew finished by touching on the cooperative potential of the existing Pacific Coast Collaborative and proposing a multi-tiered international and regional approach that combines the interests of private and public rail partners.

Dr. Laurie Troutman of the Western Washington University Border Policy Research Institute summarized her organization’s findings on cross-border car traffic. The majority of drivers they studied came from Canada for short-term visits to Whatcom County, typically for shopping, gasoline, and postal pickup. But American drivers tended to stay in Canada for longer periods of time, embarking more often on single- or multi-day trips to metro Vancouver for recreation and to visit family. Dr. Troutman also shared her involvement with the Cascadia Innovation Corridor project and invited attendees to bring their ideas for transportation to an October 2-3 conference in Seattle. With nearly 90,000 crossings in 2017 and differing travel motives from drivers, cross-border passenger rail traffic through Blaine deserves further study.

Professor Tom Roehl (coincidentally pronounced “Rail”) briefly discussed his students’ research, which included analysis of the travel market for a train station in Blaine. Although passenger rail can meet a diverse set of transportation needs depending on its scale, Cascades trains are primarily aimed at two groups of travelers: business and recreation. Roehl’s observations paint a curious picture about the Vancouver-Seattle Cascades run: little business interest, yet plenty of potential for recreational travelers. Despite Cascades’ usefulness as a mobile workspace, he cited its late-morning arrival time and the perception of poor transit-connectivity in Seattle as key reasons for a lack of business travel from Vancouver. But Roehl also said that this apparent disinterest could be challenged with marketing that reaches out to overnight business travelers and emphasizes the value and comfort of business class.

With Cascades carrying mostly pleasure travelers between Seattle and Vancouver at present, Roehl suggested that including a stop in Blaine could significantly improve ridership. Not only would this station be an ideal option for visitors to Blaine, he said, but many Canadians living south of the Fraser River could reach Blaine with greater ease than backtracking to Vancouver; due to current customs procedures, it would be nearly impossible to open another station north of the border. Roehl was adamant, though, about the need for grassroots participation through a coalition of stakeholders on both sides of the border in order for this project to succeed.

The benefits of a Blaine Cascades station to the entire region are significant. The City of Blaine would have an asset that could increase its visibility, economic vitality, and fiscal income. Cross-border travel could increase without requiring as much expansion of highway border facilities, which are geographically constrained by Semiahmoo Bay. North Whatcom County and BC’s Lower Mainland would be better-connected to travel markets all across the Northwest, opening up possibilities not just for tourists but also for conference-goers, families, maybe even those who need to renew their NEXUS cards.

Work is already underway to make the Vancouver-Seattle Cascades experience easier and less time-consuming for riders. According to Dr. Troutman, Canada recently passed legislation allowing US Customs activities to occur on Canadian soil. This means that, in the near-future, Cascades trains could receive full US preclearance at Vancouver Pacific Central Station and would no longer be required to stop at the border. Currently, even though immigration checks are performed at Pacific Central, US-bound trains must stop for about 10 minutes near the Peace Arch to receive a customs check.

Some projects proposed by the Washington State Department of Transportation (WSDOT) may also facilitate opening a station in Blaine. WSDOT, which operates Cascades jointly with the Oregon DOT, has a rail plan which includes a list of desired track upgrades. One of these would allow Cascades to reach 90 MPH top speeds in some areas between Marysville and Blaine, and another could reduce delays when entering Pacific Central Station’s rail yard. Anton Babadjanov, an AAWA member, discussed these improvements in AAWA’s first quarter 2019 newsletter, stating that they have the potential for, “...10-13 minutes of time savings that are achievable with minimal capital expenditure.”

These upgrades are not funded yet, and any changes to the Cascades operating schedule must also be approved by the owners of the tracks (in this case, Burlington Northern Santa Fe, or BNSF, whose orange freight locomotives are a common sight across the Pacific Northwest). But if pursued in addition to a new Blaine station, these improvements could yield both increased ridership and faster run times. According to the rail plan, WSDOT’s goal is to reduce one-way Cascades travel time between Vancouver and Seattle from today’s approximate 4 hours down to 2 hours 37 minutes, though this will require further upgrades that push top speeds in much of the corridor to 110 MPH.

Before any new stops along the Amtrak Cascades corridor can be considered, the WSDOT Rail, Freight, and Ports division requires communities to go through a thorough review process (link to PDF). Six evaluation criteria have been established, including:

AAWA’s Lloyd Flem, who presented this information during the meeting and has been active in passenger rail advocacy for decades, felt that Blaine could be the most qualified place along the Cascades route to receive a new station based on these criteria. But he echoed Tom Roehl’s sentiment that the cross-border community and its elected officials at both local and state/provincial levels must sustain their interest in the project as it moves forward. The people of Blaine, he said, “...must take the lead in moving forward the sound idea of a station stop for their city and many of their Canadian neighbors.”

Amtrak Cascades trains pass right through the heart of Blaine, Washington, a picturesque town along the US-Canada border. Despite its popularity among visitors, Blaine is difficult to reach without a car. With existing tracks and an old station building beside their historic downtown, Blaine’s residents and businesses could benefit hugely from having a Cascades train station. All Aboard Washington (AAWA) held a meeting at Semiahmoo Resort on July 13th to discuss the idea of opening a station in Blaine....

All Aboard Washington's meeting in Blaine has generated media coverage from both sides of the border....

WSDOT's ultra-high-speed rail study has been published, and has received attention from many media outlets....