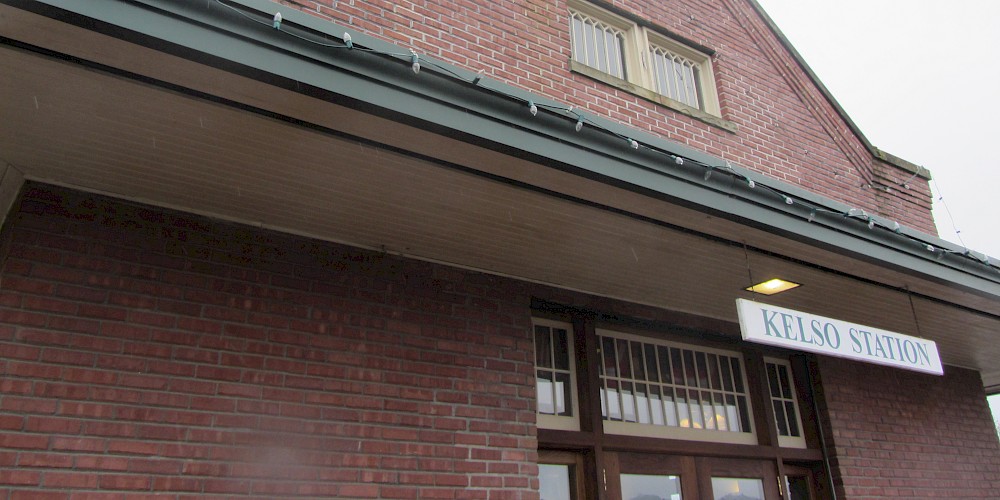 I am cautiously optimistic about the continued funding for our Amtrak Cascades service from the Washington legislature and now the Oregon legislature. At the November 15 meeting of the Association of Oregon Rail and Transit Advocates (AORTA) in Eugene, Mr. Hal Gard, head of ODOT Rail, expressed serious concern that legislative funding to keep those trains from Portland to Eugene might not be available. (The majority of the funds to operate our intercity passenger trains comes from passenger fares and purchases, but some state subsidy is still needed.) 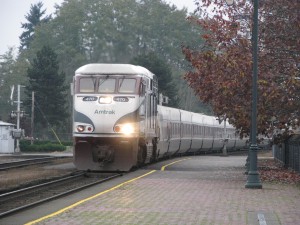 A more positive message came from AORTA President Dan McFarling on December 13, when about 18 AAWA members who traveled by train to Portland met with AORTA leaders at their Portland Union Station office. This more positive message was reinforced by Hal Gard in a long and very cordial phone conversation I had with Hal a couple days after the Portland meeting. Oregon Governor John Kitzhaber (D) has sufficient funds in his 2015-17 budget proposal to keep Oregon's Cascades trains on track. Hal praised the idea of pro-rail legislators from both states cooperating closely for the benefit of our Northwest Corridor. He also complimented AAWA and AORTA for their cooperative and active rail advocacy.

On December 16 I was privileged to have a 90-minute meeting with the founder and Co-chair of the Washington Legislative Rail Caucus (LRC), Rep Luis Moscoso (D-Bothell). A wide variety of topics were discussed. Our meeting could be summarized by the reality that Rep. Moscoso remains fully supportive of our State's rail programs, has been and will continue to work closely with his Oregon legislative counterparts, and agrees with the push for more intercity passenger rail beyond that provided by the federal ARRA ("stimulus") monies. A virtue of Luis and the LRC is its fully bi-partisan nature when rail is involved. AAWA and AORTA will be invited to attend proposed joint meetings of LRC and its Oregon counterpart in 2015.

Rep. Moscoso expressed interest In a relatively new pro-rail group called "Solutionary Rail." Mr. Bill Moyer, Seattle-based leader of that group and I corresponded and plan to meet in person in January, probably at Tacoma's Freighthouse Square, to discuss issues of mutual interest. I mentioned to Bill that while AAWA gladly works with all individuals and groups who support rail, we do not necessarily embrace all positions that these groups may take and we avoid submerging our relatively small, but well-respected organization within larger entities whose broader agenda may contradict the views of some AAWA members and allies.

In a phone meeting with Bruce Agnew, active AAWA member and leader of the Cascadia Academy, Solutionary Rail was also mentioned, and like with Luis, in a relatively positive light. Bruce has also been involved in researching the idea of future funding for passenger rail infrastructure utilizing public-private partnership, rather than just relying on funding from governments, important though they have been. Ron Pate, head of WSDOT Rail Division, agrees that looking for new means of funding passenger rail infrastructure is positive.

Ron Pate continues leading the strong efforts to build our Northwest Corridor Amtrak Cascades passenger train service. Ron believes Governor Jay Inslee (D) and WSDOT Secretary Lynn Peterson are fully in favor of our rail program. Funding for maintaining the Cascades program is in Inslee's proposed budget, AAWA is pleased to note. A few weeks ago Former Secretary of State Ralph Munro, Bruce Agnew and I had a most cordial meeting with an Inslee transportation staff person, Ms Robin Rettew. The three of us offered rail as being a green and vital part of our state's transportation future.

But some rail advocates have been a bit concerned that, while the governor has given strong support to green transportation, with an overwhelming endorsement of electric highway vehicles, rail has not usually been part of Governor Inslee's public conversation. I have long argued that electric highway vehicles, even if powered totally by such environmentally benign sources as solar, wind, tide, and low-head hydro, are still highway vehicles, with the congestion, road wear, public costs, accidents, scatteration and sprawl that the auto/truck modes promote. I hasten to add that I do support electric highway vehicles, as well as bikes, pedestrians, buses, planes and watercraft, but, because I'm a bone-deep rail guy, get a bit concerned when rail is sometimes not mentioned along with other forms of transportation. (And Ok, the 1950s youth remains in me; I confess I still like big old gasoline using US-made sedans and Harley-Davidsons!)

When with Ron Pate and elsewhere, AAWA praises the work of our Rail Division while gently pushing for more service, east-west through the Yakima Valley as well as for the Amtrak Cascades, and for other rail development and equipment purchases. But we understand that this "push" requires funding from the State or elsewhere. We are not those who favor program enhancements while ignoring the means to pay for it or the staff to administer it.

A final meeting to mention here is a dinner with Mr. Ed Galligan, Executive Director of the Port of Olympia. Rail is vital to the well-being of Washington's public ports and Washington's economy. Most intercity passenger train advocates understand that. I told Ed I support a muscle and bone port which moves goods from rail and truck to ship and the reverse. Olympia is one of those and should remain a muscle and bone port, though it's smaller than such ports as Seattle, Tacoma, and Vancouver (WA and BC). Ed emphatically supports the state passenger rail program, regularly rides the trains, and wants to involve others from his port and other ports in support of passenger as well as freight rail. I look forward to working with Ed, who joined AAWA within a day!

A message from our AAWA president

By Karen Keller It’s been a busy two months since I was elected president of All Aboard Washington in January. Most...

Moving ahead with Passenger Rail as we enter 2015

I am cautiously optimistic about the continued funding for our Amtrak Cascades service from the Washington legislature and now the...

All Aboard Washington's annual membership meeting will be on November 8 from 1 p.m.-3:30 p.m. in the community room at...

All Aboard Washington will be meeting on Sept. 13 in Yakima. The meeting will be noon-3 p.m. at Russillo's Pizza...